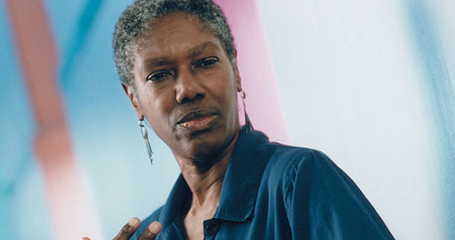 recent recipient of the IRNE (Independent Reviewers of New England) Award for Solo Performance, and selected as a 2012 United States Artists Ford Foundation Fellow, has been an active presence in the American avant-garde theatre for several decades. Also lately, she directed a critically successful Roxbury Repertory Theater production of “The Glass Menagerie” by Tennessee Williams. She received an OBIE Award and a Bessie Award for Outstanding Achievement in Performance for her play, Sally’s Rape.

She is widely anthologized including Extreme Exposure, Moon Marked and Touched by Sun, and Performance and Cultural Politics, edited respectively by Jo Bonney, Sydne Mahone, and Elin Diamond. One of the early cast members of Ntozake Shange’s for colored girls who have considered suicide when the rainbow is enuf on Broadway, Robbie went on to write and perform regularly in cities across the country and abroad.

Striving to facilitate dialogues on race between local whites and blacks, she created the Primary Sources series in Mississippi, Boston and Los Angeles produced by The Arts Company. In 1998 her “Buffalo Project” is highlighted as one of “The 51 (or So) Greatest Avant-Garde Moments” by The Village Voice, a roster including work by artists such as Igor Stravinsky, Pablo Picasso, and John Cage.

Robbie McCauley is Professor Emerita of Emerson College Department of Performing Arts and the 2014 Monan Professor in Theatre Arts at Boston College.